WASHINGTON — The U.S. Department of Defense is looking to address the threat of airborne autonomous weapons in the hands of terror groups amid the rapid growth of commercially available unmanned drones.

With ISIS fighters using remote controlled drones to deliver grenade-sized bombs in Iraq, the DoD has begun looking beyond current threats to the prospect of preprogrammed autonomous drones, according to The Washington Post.

The Defense Advanced Research Projects Agency oversees the Pentagon's Mobile Force Protection program, which is intended to protect U.S. troops from these aerial threats. J.C. Ledé, the director of the MFP program, told The Washington Post that DARPA plans to start awarding contracts within weeks in an effort to develop the necessary technology to counter autonomous drones.

Currently, radio frequencies that remotely control drones have been used by the military as the main tool for tracking the unmanned vehicles, said Ledé. But the threat of programmed drones, including large swarms of drones tasked with carrying out a specific mission, presents new difficulties for keeping soldiers safe.

The first phase of contracts will focus on technology that goes beyond jamming radio frequencies.

"We’re looking for scalable, modular, and affordable approaches that could be fielded within the next three to four years and could rapidly evolve with threat and tactical advancements," Ledé said back when the program initially sought proposals in August 2016.

Companies selected by DARPA’s MFP program will initially receive roughly $3 million for the first phase, with the possibility of advancing to two additional phases of work. The two later phases are expected to be larger, longer contracts.

The program seeks to stop UAVs up to 200 pounds in weight, reported The Washington Post. Additionally, the program is more concerned with threats toward more vulnerable mobile convoys, as opposed to stationary targets that are easier to defend. The threat of unmanned drones being used to directly hit U.S. troops and their vehicles will be the main focus. 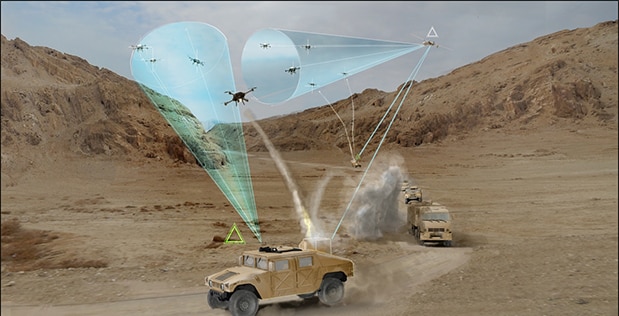 Artist rendering of potential technology developments from DARPA's Mobile Force Protection program to counter the threat of unmanned drones.
Photo Credit: DARPA
"When you’re more than a couple hundred meters out, you can’t tell what that thing is carrying," said U.S. Marine Corps Lt. Col. Dave Sousa, who is in charge of examining the threat of unmanned aircraft for his service. "You can’t tell if it has a GoPro camera. ... You don’t know what it is. So you’ve got to detect, track and ID, and then there’s how you’re going to deal with that threat."

Drone warfare has been increasing around the world. Small, unmanned drones have been used by both Ukrainian soldiers and Russian separatists in Ukraineas well as ISIS fighters in Iraq, and recent reports suggest that Houthi rebels have been using Iranian-made drones in Yemen.

DARPA hopes to see the first phase commence in May. That phase is expected to last about a year, with the second phase between the top two competitors lasting about 18 months. The final phase will focus on large, swarm-sized raids of autonomous drones and is expected to last 21 months.

With the rapid evolution of drone capabilities, the MFP program seeks to keep U.S. troops and equipment safe by staying ahead of emerging threats.