I couldn’t tell you where, exactly, the crashed F-4 Phantom came from. The desert is vast, the plane ancient, and the history stored somewhere in Air Force internal logs if at all. What I can say is this: on this Wednesday morning in Albuquerque, New Mexico, between the torn halves of the now-scrapped jet, I watched a robot hunt for a bomb.

Part of the 12th annual Western National Robot Rodeo, the competition was held at Sandia Labs. (The F-4 Phantom wreck had already been relocated to the site, which is shared by Kirtland Air Force Base, years ago for use by the robotics team). The rodeo as a whole is an invitation-only event, offering free training in unusual scenarios for the police bomb squads and military explosive ordnance disposal (EOD) teams that choose to participate. Teams competed in 11 challenges overall; the one with the downed jet was dubbed “Red Dawn,” complete with a wooden Soviet flag covered in ‘Wolverine!’ graffiti.

While inspired by the 1984 film, it’s unclear exactly what side the plane and the EOD team represented. Were they both used by the fictional invaders? Was the plane instead a stand-in for a MiG, and the EOD team represented instead a surprisingly diligent effort by high-school aged insurgents to clean up a crash site of potential hazards? Whatever the top-level explanation, the task was the same as bomb squads have tackled since the creation of bomb squads: find the things that can still go boom, get those things somewhere safe before they do. 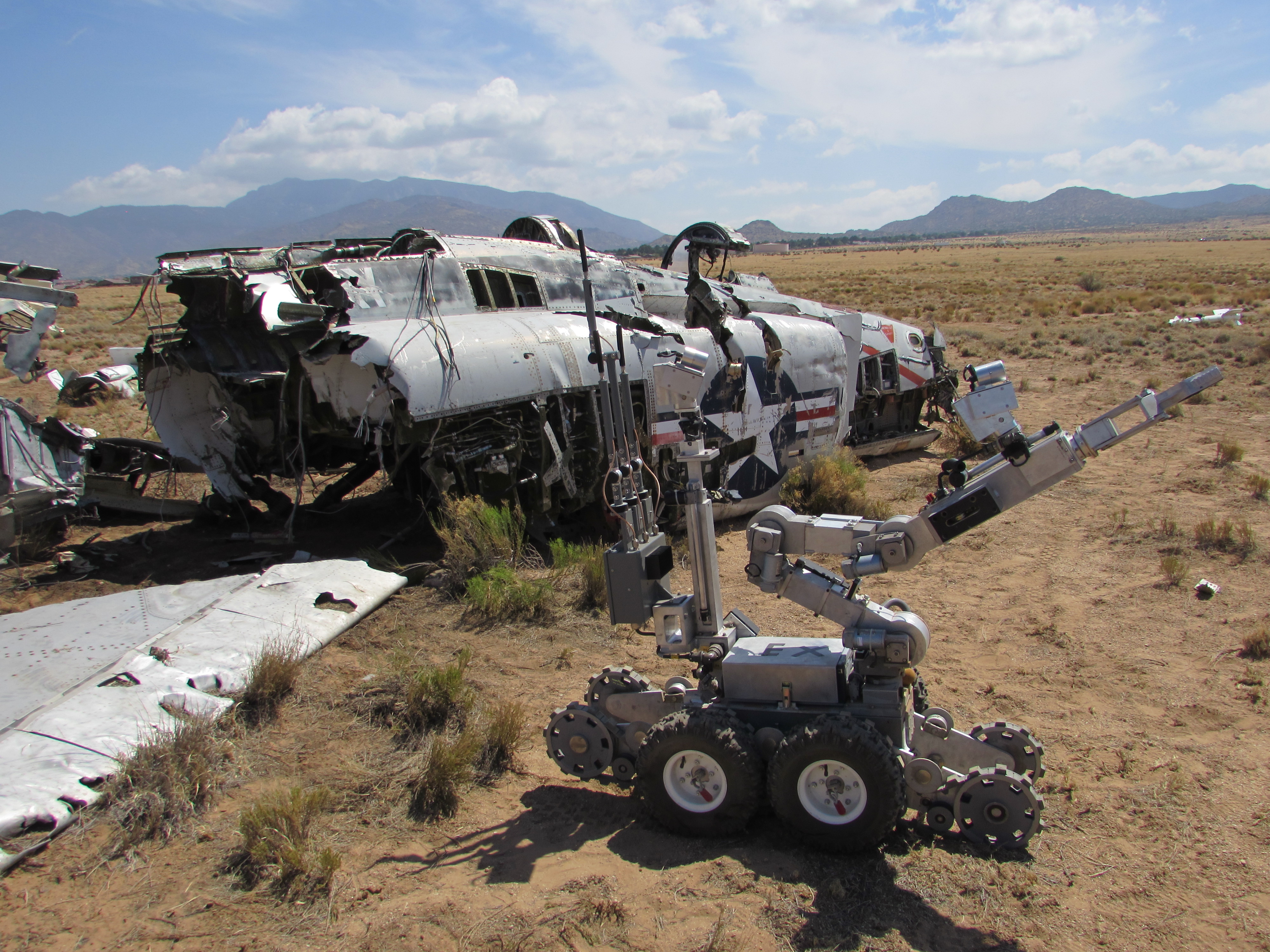 After exploring the simulated crash site, this robot looks for possible objectives hidden elsewhere in the vicinity. (Kelsey D. Atherton)
2 of 5 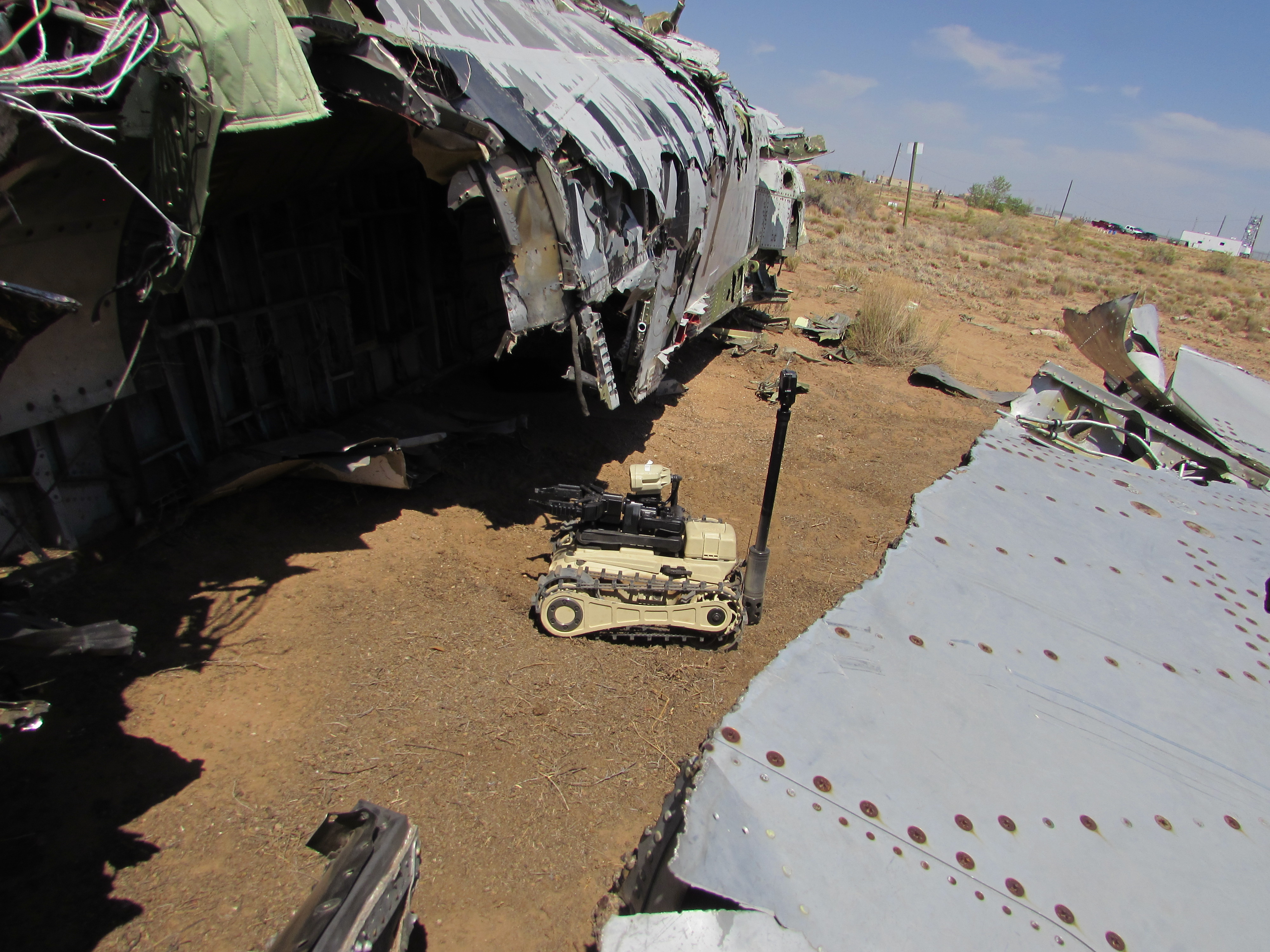 As part of the Western National Robot Rodeo, this robot looked for possible mock-explosives hidden in a crashed F-4 Phantom. (Kelsey D. Atherton)
3 of 5 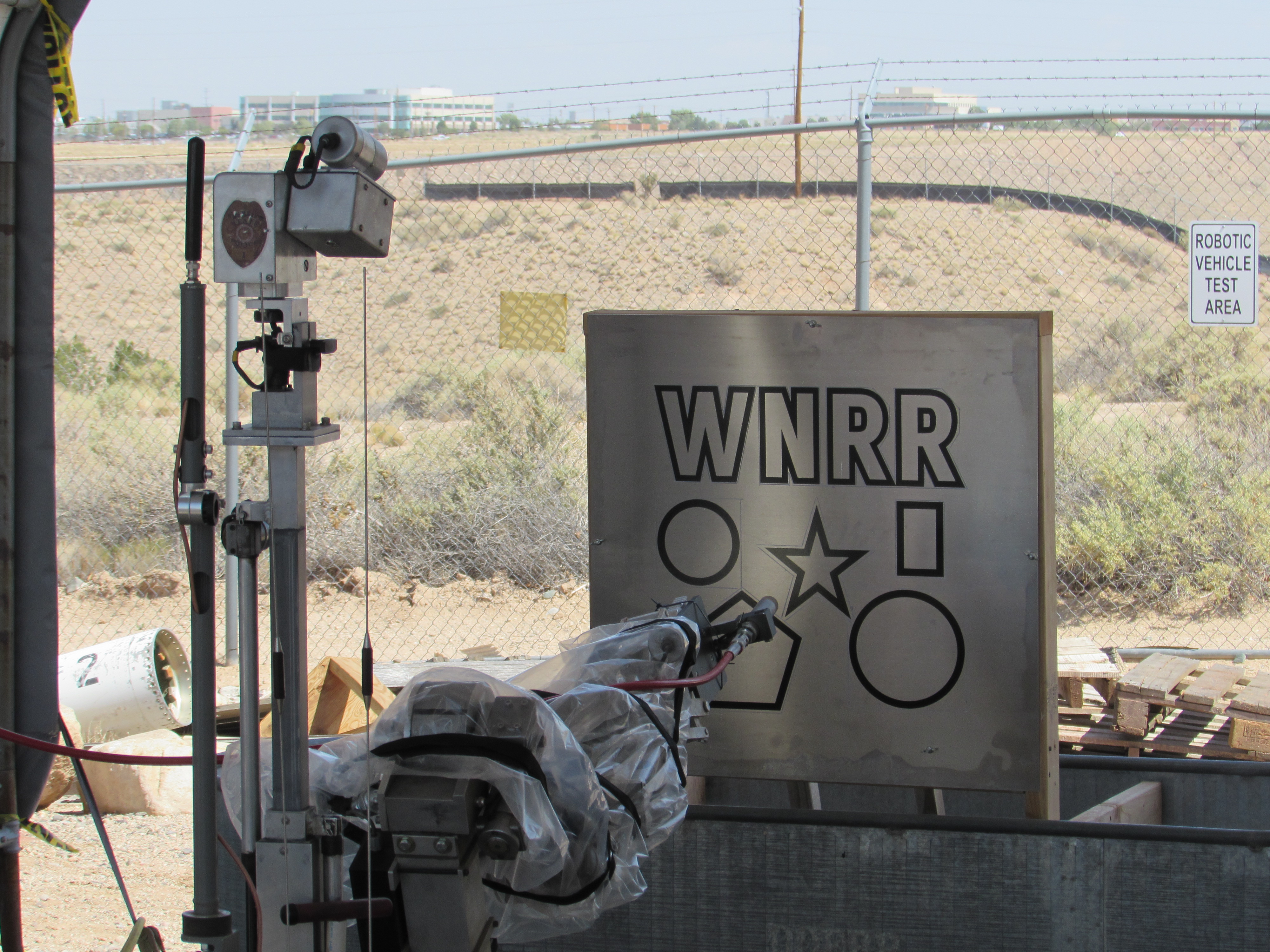 As part of the Robot Rodeo, the New Mexico State Police bomb squad is using this robot to try and slice a shape through this sheet of aluminum. (Kelsey D. Atherton)
4 of 5 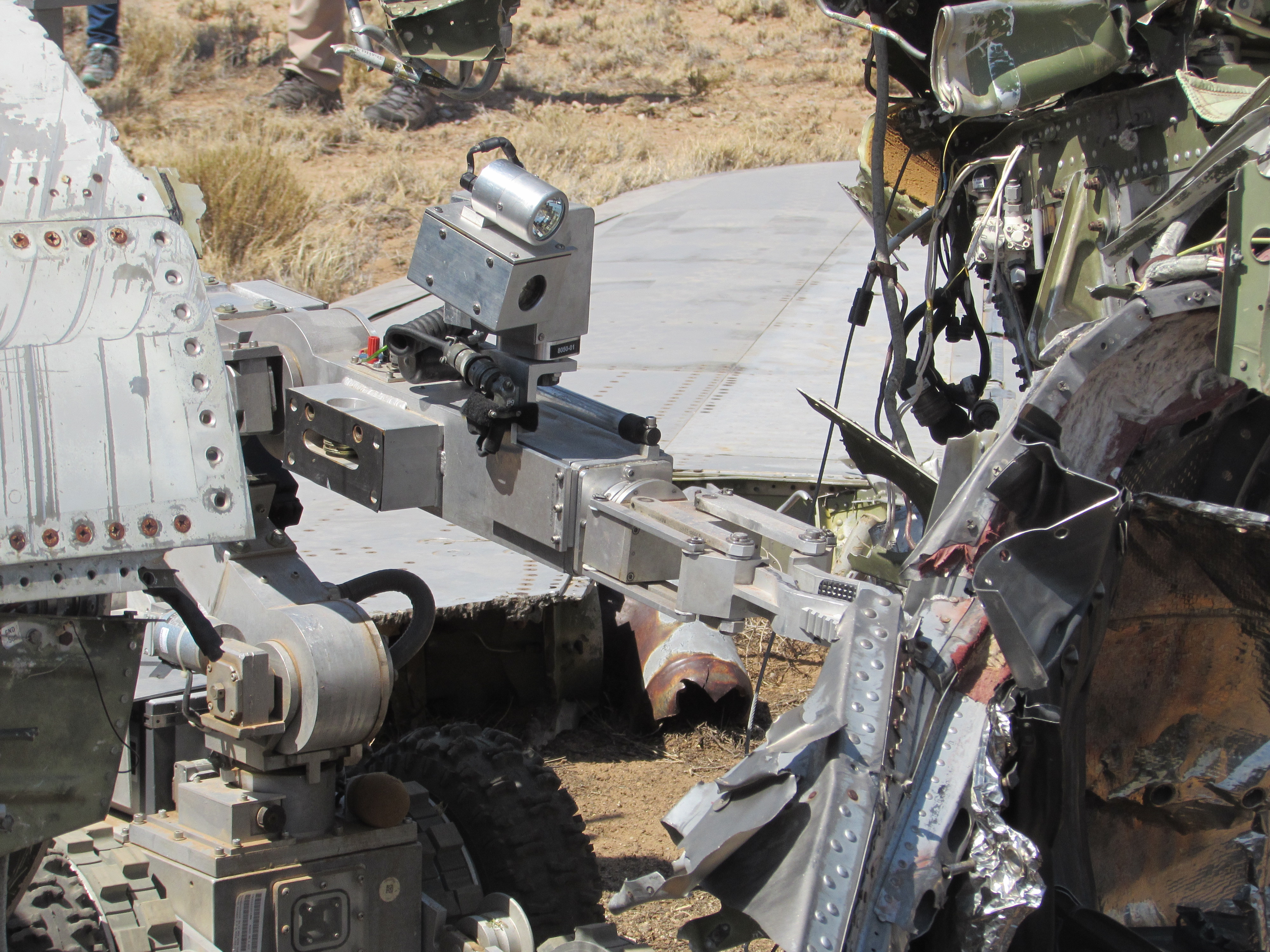 Driving between the two halves of the wrecked plane, the robot pokes around for clues about suspected mock explosives. (Kelsey D. Atherton)
5 of 5 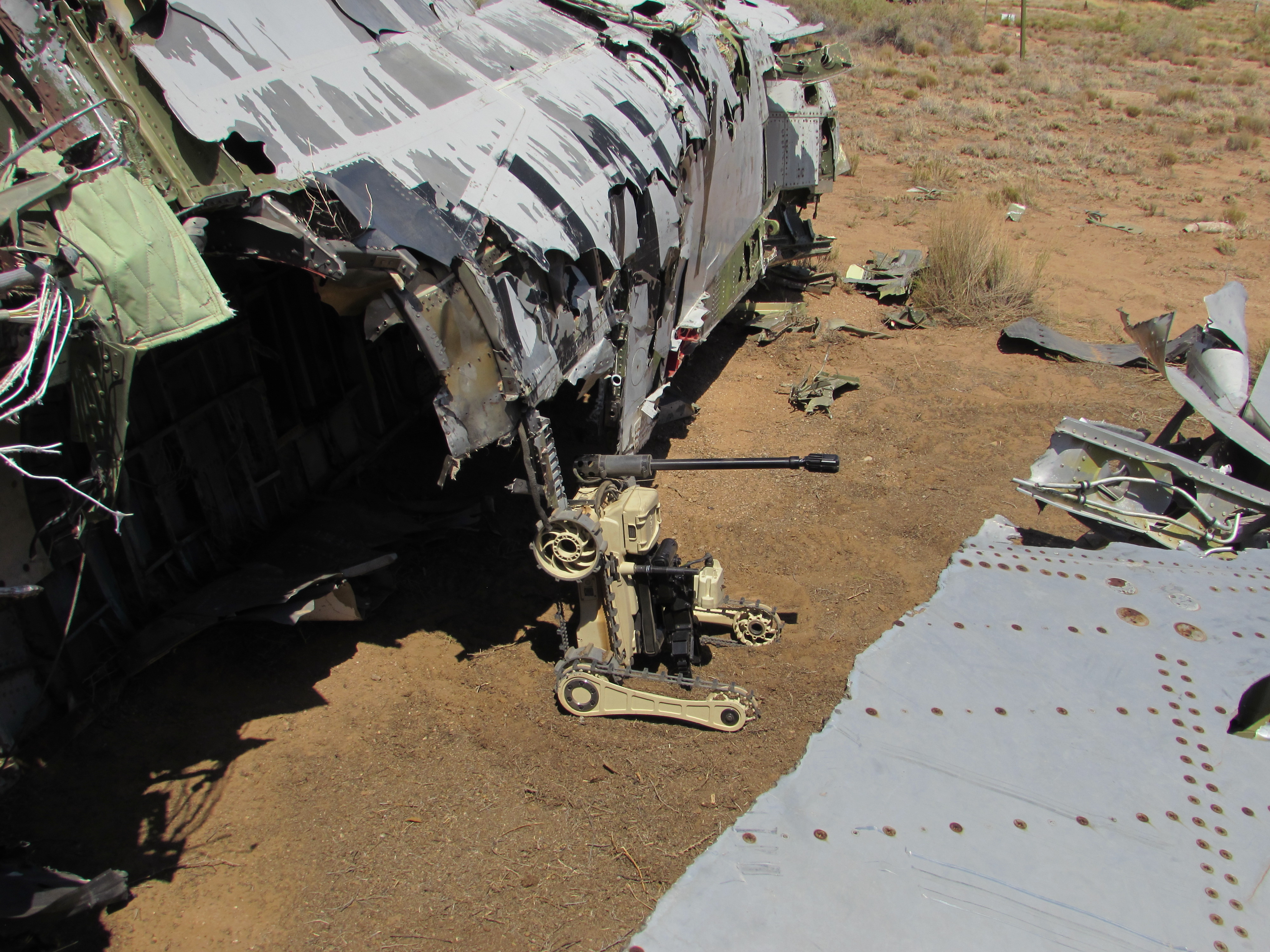 The Robot Rodeo provides a safe environment for EOD teams to explore novel techniques, like pointing all the cameras down into dirt. (Kelsey D. Atherton)

The EOD team on the ground was from Kirtland’s own 377th Air Base Wing. To poke through the wreckage, the 377th piloted an F-6 Andros from Remotec, and a smaller MTGR from Roboteam. With just 90 minutes to locate the explosives, the machines moved as quickly as their bodies allowed, but not so quickly that they would break during the training. Robots like this run about $100,000 on the smaller side, and the bigger robots come close to half a million. When dealing with a real threat, that’s a price worth paying to keep a human out of danger, but it’s a lot to risk on a training exercise.

In the time I and other assembled media spent watching the 377th poke around the Phantom, the team had yet to locate any of the objective packages. Some of this was the scale of the task: objects were hidden out of sight and in strange places. Another part is the simple limitation of the machines. The F-6 has a single arm with a camera mounted on the limb. Hunting through scraps means staring down a pinhole mounted roughly around the elbow. The MTGR has more cameras; at one moment one of those cameras poked up on a stalk to peer around the wing, like R2-D2 inspecting an X-Wing. In another moment, the little robot appeared to do a handstand, with the cameras pointed squarely at the dirt. I’m not sure how much those cameras aided visibility.

On another part of the base, the bomb squad from the New Mexico State Police was learning how to use a water cutter. One feature of the Robot Rodeo is the presence of invited vendors. The vendors typically provide lunch for the people competing, and in addition offer possible new robot accessories for the teams to try out. In this case, the accessory was a high-powered pressure cutter, and the goal of the bomb squad was to try and cut specific patterns through a target aluminum sheet. After the challenge, the cut sheet would provide the team its report card, showing how ably a robot was maneuvered to slice through a rectangle, or a circle, or a star. As spelled out, the scenario here was creating a way into a vehicle where the obvious latch might be booby-trapped. Rather than open a rigged trunk switch, an alternative path in might save lives.

During the part of the demonstration I witnessed, the pressure cutter blasted water through aluminum well enough, though we didn’t stick around long enough to see if the officers controlling the robot were able to cut the shapes they needed.

Sign up for our Unmanned Systems newsletter
Get a bi-weekly update on the challenges and opportunities surrounding the use of drones.
Thanks for signing up!
For more newsletters, click here

While the other nine scenarios were off-limits for media, Jake Deuel, Sandia robotics manager and Robot Rodeo coordinator, described a few. “The Long Way” was an obstacle course. “Recon Rally” is an remote control car competition, done in conjunction with multiple teams of robotics students, to see if cheaper, simpler remote control cars can scout out possible threats for the more sophisticated robots to tackle later. In a bomb rich environment, using cheap machines for the initial scouting might make sense, since cheaper robots mean more tolerable failures, should the machine run into a tripwire.

“Kamikaze” was the most interesting scenario not on display. Deuel envisioned a commercial transport of explosives, suddenly attacks by some nefarious actor at a major highway interchange. Only this attack would feature commercial drones, cheap quadcopters modified to carry explosives, creating a tremendous mess. For the bomb squads competing in this challenge, the assumption was something like cleaning up the aftermath: a flatbed with some explosive cargo remaining, surrounded by a field of downed drones, potentially still rigged to blow up. When I visited the Robot Rodeo in 2013, commercial drones as both tools and threat was still an idea in its infancy. Since then, we’ve seen quadcopters modified to drop grenades and scratch-built drones with explosives inside kill an EOD tech attempting to demine it. The rodeo has adapted somewhat to the new threat environment, creating a challenging but safe way for the people tasked with dismantling explosives to learn how to do so in novel situations, far from the pressures and dangers of combat itself.

“This is training you can’t get anywhere else,” said Gabriel Luna, a sergeant with the New Mexico State Police bomb squad. It’s also a way to learn the robot’s deficiencies, he noted, pointing out the wear and tear on the squad’s F6A, which the state police have had since 2004.

Though it had been half a decade since I last witnessed the competition, the robots struck me as similar to the point of identical. When I asked about the pace of change in robot design, Deuel said it was slow.

“There’s more change in accessories,” said Deuel, “and in the software.”

Adding pressure-sensitive feedback allowed the robots to display the position of their various appendages on the screens the operators used to control the robots, making it less likely that a robot would get stuck somewhere because the person in charge didn’t know where the limbs were.

The challenge also allows engineers who work on robot design to see user frustration in real time, and to see use cases for the machines they may never have imagined. Watching robots struggle over real stairs, or wobble when driving over scrapped wings, can inform the next generation of robots, and in turn keep both the present and the next generation of bomb squad officers alive. When the robots fail, there’s always the possibility of sending in a human in the suit, but everyone I spoke to wanted to keep the suit as a last resort. Someday, should the robots become capable enough, the bomb suit may be as much a relic as the scattered remains of the Phantom.

How would feds be able to use their own devices for work?

Brian Egenrieder, of SyncDog, speaks to Fifth Domain about obstacles between feds and their devices at work.
Close
Now Playing

What's in store for facial recognition in 2020?
Play Video

Make it fun: A cyber exec's take on training a workforce
Play Video